Spectacular Sword-Dancing Festivities on the Moors

Anyone who has ever found themselves feeling like Christmas starts a little early and is a bit too much like work, what with all the present wrapping and cooking to be done, would do well to spare a thought for our medieval ancestors. They had an entire twelve days of celebrations to contend with, almost all marked with their own revelry, pageantry and food.

It’s not surprising they needed twelve days to let off steam. Today, we may get into the Christmas spirit much earlier with extra miniature treats added to our diet throughout December – from a themed calendar, perhaps? But once, Advent marked a period of semi-fasting. The Twelve Days of Christmas were an opportunity to indulge after three or four weeks of a ‘restricted diet’. These weeks must have felt very bleak indeed for the already malnourished poor.

The Medieval Manor House in Snow, by Angela Waites Photography

As the Twelve Days progressed, the festivities reached a roistering climax on the glorious Twelfth Night, or sometimes as in this area on the following Monday, known as Plough Monday. Immediately after this, there would be a return to labour-intensive toil, with the tough ploughing ahead due to last until March.

Over the years, these final festivities and celebrations have caused debate among historians and folklorists. By the beginning of the twentieth century, a connection was suggested with ancient fertility rites and by the 1960s some folklorists were, probably erroneously, describing the sword dance from the region as rooted within a Neolithic rite to awaken the earth from its winter sleep. Indeed, the noise of the dancers would have been enough to wake most sleepers! Given that these dances took place in rural areas totally at the mercy of the whims of the harvest, it is easy to appreciate why they might have been interpreted in this way. 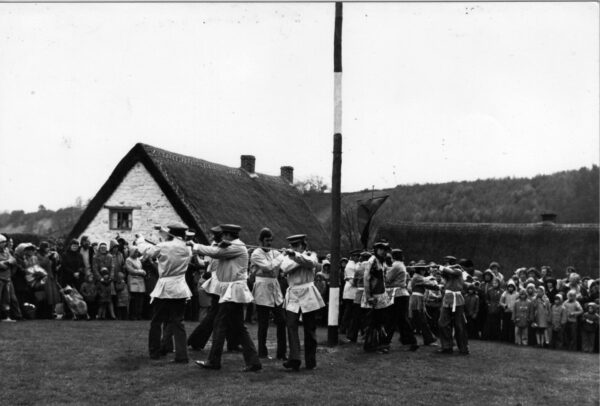 Similar dances were known in other parts of Yorkshire, as well as Cleveland and Northumberland. As part of the pageant, the dancers wore elaborate dress or embellished existing clothes with ribbons. As well as having a number of mid-twentieth-century photographs of the dancing, Ryedale Folk Museum is fortunate to have been favoured with visits from the Goathland Plough Stots throughout the decades, a rare surviving regional troupe that was revived after a forty-year break by schoolmaster Frank W. Dowson in 1922.

Their dances, marked by spectacular sword clashing, begin with ceremonial words, either sung or shouted, and end impressively with the raising together of the intricately-locked swords. 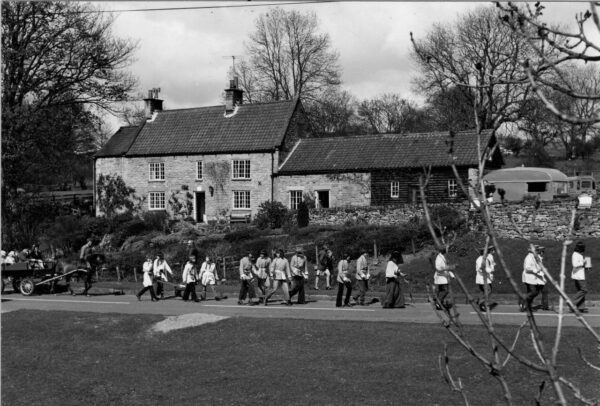 Processing with the Plough by Geoffrey Willey

The Goathland troupe also dragged a plough, giving rise to their name, stots being another word for bullock – reinforcing the physicality of the pursuit and in reference to the animals normally utilised for draught purposes with the plough. Their five unique dance routines have been traced at least to the early-nineteenth century, but sword dancing is certainly much older. It is known, for example, in the Netherlands during the fourteenth century and, in 1777, antiquary John Brand recorded seeing the ‘lock’ formation in Tyneside.

Before this date, it is difficult to pinpoint the arrival of the dance, though the link with pagan times is most likely flawed, though tempting. The ancient landscape of the North York Moors, scattered with remote churches and ancient stone crosses, can feel somehow inherently and serenely spiritual – magical, even, especially in winter. There is, however, a much more prosaic interpretation.

Most likely, the Plough Stots’ rise in popularity was a result of the financial exchange that took place. Money was collected in ‘payment’ for the highly-entertaining, celebratory spectacle, part of an acceptable system of begging. It is a reminder that for the poor the season was a time for celebration, but one they could not always afford.

Nowadays, the Museum is delighted to welcome the Goathland Plough Stots and other historic dancers to our Manor House for Christmas performances. 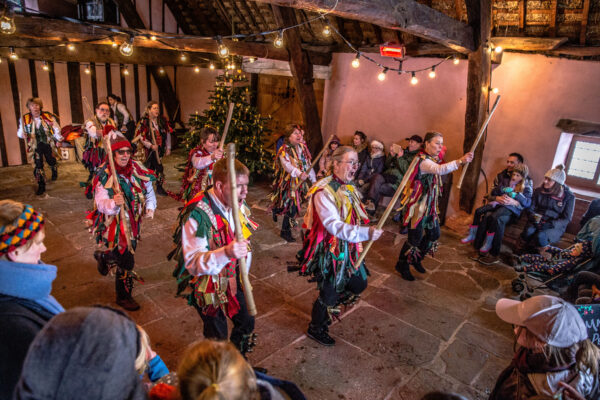 Historic dancers from ‘The Minster Strays’ perform at the Museum, by Angela Waites 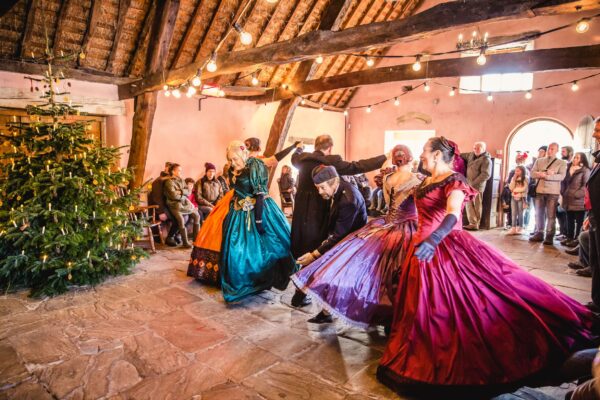 Historic dancers from ‘The Arbeau Dancers’ perform at the Museum, by Angela Waites