Meet the Animals: a Farming Heritage

A variety of animals have been farmed in Ryedale and the North York Moors for thousands of years. At the Museum, we tell this story through a traditional farming area featuring examples of rare-breed animals that were once abundant in the region. You can also help feed them as part of your family day out in the North York Moors. 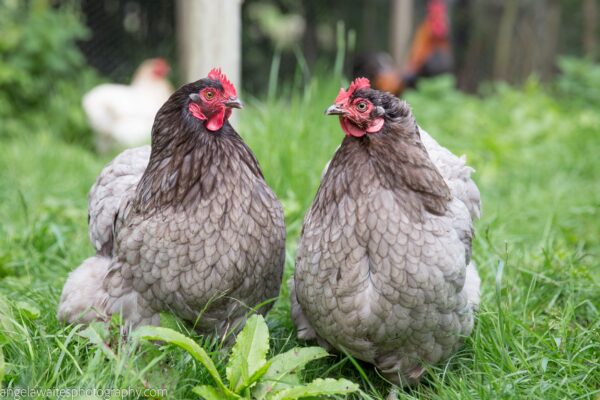 For much of the year, we have Manx Loaghtan sheep, Tamworth pigs and traditional-breed chickens, including Light Sussex, Barnevelder, Orpington and Yorkshire Pheasant Fowls. 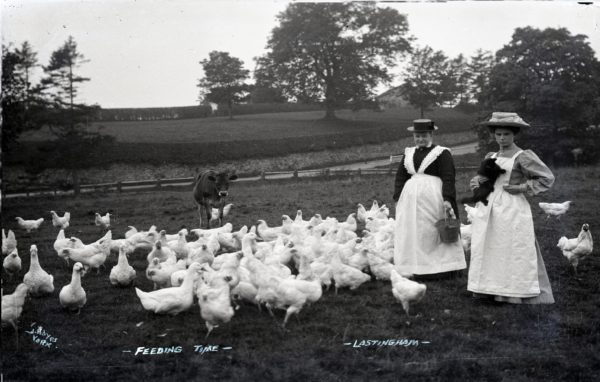 Our collection photographs also offer a fascinating insight into the lives of the ordinary people who lived in this area, particularly significant since rural farming communities often go undocumented. The necessary chores associated with tending flocks of hens would have been undertaken by a range of family members. In ‘Feeding Time’, one of the women keeps a close guard over their black cat! 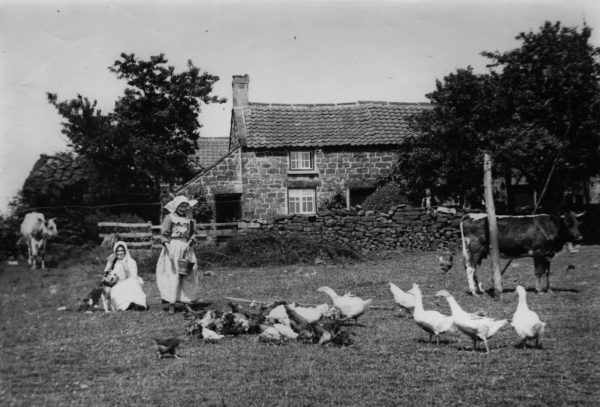 Much like cows and sheep, chickens were also herded on foot. It was not uncommon to see large flocks of the birds being walked from village to village.

Perhaps no animal was more self-sufficient and adaptable than the highly-popular cottage pig. At the Museum, our Crofter’s Cottage shows an example of a Tudor dwelling which the inhabitants shared with their livestock. Some cottage pigs would have been brought into the home at night and the family would have benefitted from their warmth. 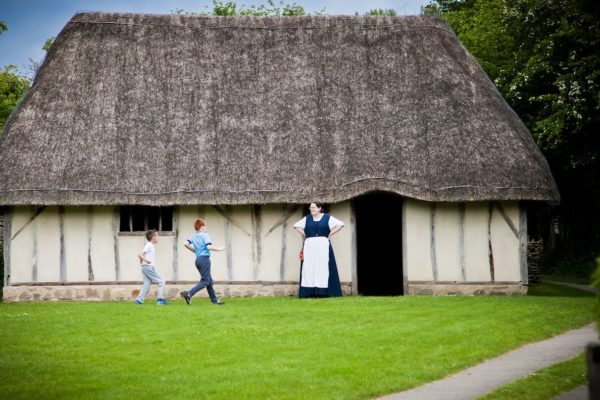 The pig’s ease of breeding and ability to feed from table scraps and orchard windfalls made it an ideal cottage animal in rural communities, long after cramped conditions banished it from urban areas in the nineteenth century.

Most years we have a pair of pigs for visitors to feed at the Museum. In recent years, these have been Middle White, Saddleback or Tamworth from Temple Newsam’s specialist breeding centre, Home Farm, near Leeds.  The Tamworth, with its distinctive ginger colouring, is considered Britain’s oldest pure-breed pig. 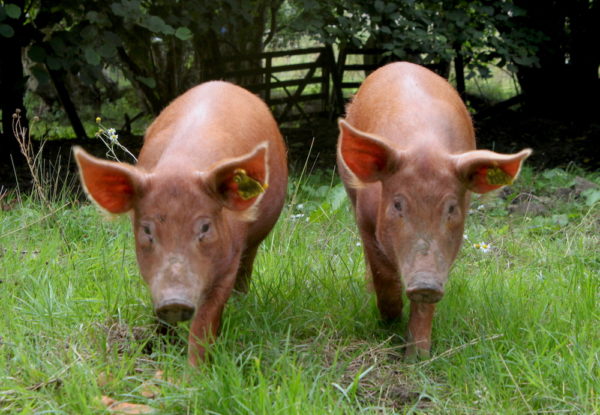 After the Second World War, Tamworth numbers declined rapidly as farmers concentrated on faster-growing breeds. Now, there are fewer than 300 breeding pairs and the Tamworth is currently classified as ‘vulnerable’ by the Rare Breeds Survival Trust. 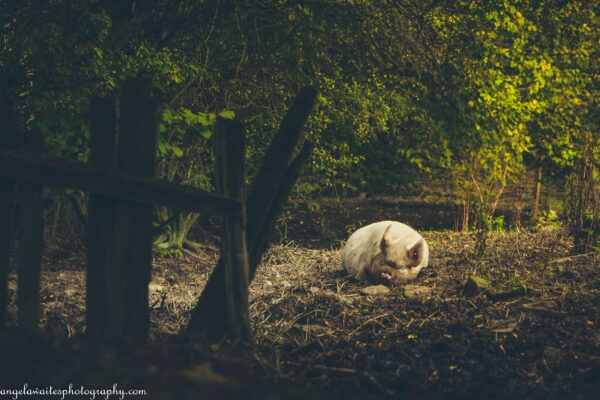 It is an important reminder that farm animals that have inhabited these isles since the Iron Age are in danger of being lost.

Nowadays, bacon sandwiches can be a regular snack for many meat-eaters. But within the Museum collection, a rare first-person account of life in the area during the early decades of the twentieth century shows what a rare treat bacon would have been – anticipated with relish and often associated with the festive season. According to this, during the 1910s “Nearly every cottage had a pigsty in the back garden. They were killed mostly around Christmas time, and a grand time it was too.”

This memoir was transcribed from an oral account given by a local man named only as George Robert – sadly, it is not known if Robert is his surname or a middle name. From near Kirkbymoorside, George was one of ten children.

George’s family was very careful not be wasteful, utilising every part of the pig for a variety of purposes and dishes. Indeed, a popular saying declared that every part of a pig should be used ‘except the squeal’. If properly prepared, the family would be sustained by their Christmas pig for many months.

George recalled heating or ‘rendering’ the fat to produce lard: “We all helped in cutting… little squares, which were put into a large pan to be hung… over the fire. As the fat melted it was taken out of this pan and put into earthenware vessels.” This lard would have been used for frying foods and within a range of recipes and baking, particularly prized for making pie crusts and pastries. It may even have served non-culinary purposes, such as waterproofing. Medicinally, lard was also applied to treat burns and inflammation.

George’s family made brawn by boiling “the pig’s feet, ears, tongue, head and small bits of pork” until the meat came off the bone. This was then left to cool, resulting in the jelly-like product. As well as this, the pig’s blood generally became black pudding when mixed with oatmeal, suet, herbs and seasoning, and the pig’s intestine would have served for making sausages. Many local families had their own closely-guarded sausage recipes.

George also recalled the making of the “yearly supply of bacon and ham” by salting the sides and hams for about three weeks. Once cured, they were hung in the kitchen to dry. In George’s family, this task fell to his father who would also sell one of the hams each spring, using the income to buy next year’s pig.

This way of life continued for some families into and even beyond the 1950s, with a particular upturn during World War Two. But as the popularity of the cottage pig decreased elsewhere, the area of Ryedale became an important supplier of the famous York hams. These travelled the country via the railways, from Simpsons of Gillamoor, the Smiths of Eskdale, Harts of Ugthorpe and Boyes of Kirkbymoorside.

Finally, a word should be reserved for the humble cow, captured in our historic photos. Herds were farmed in the area, but some families also kept an individual animal for milk – as anyone familiar with the pantomime of ‘Jack and the Beanstalk’ won’t be surprised to read. 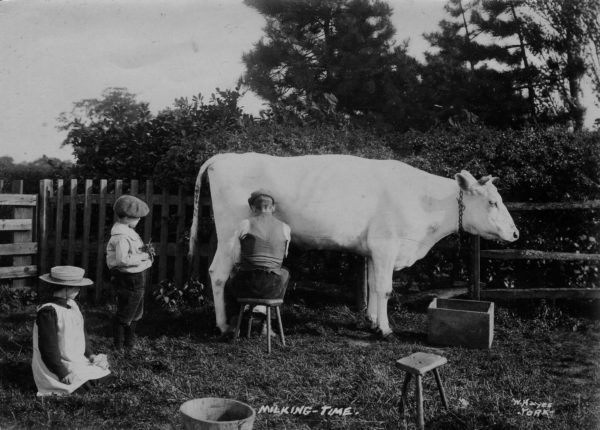 Milking by hand was the only option until the late nineteenth century. In rural areas with small herds, the process was not mechanised until well into the twentieth century. 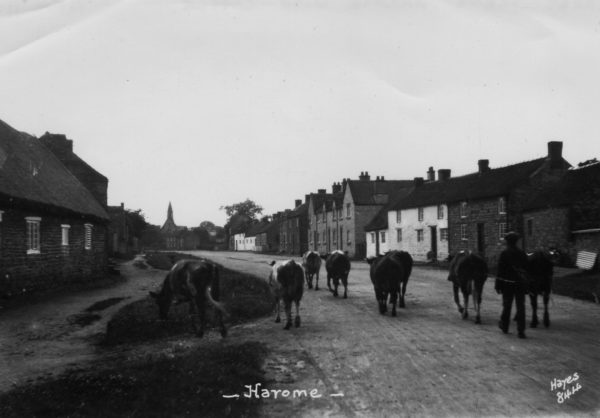