The objects and buildings at Ryedale Folk Museum reflect the lives – and, of course, deaths – of the people of the North York Moors and surrounding area. But sometimes, they can also help up to delve deeper into the preoccupations of people across the country. Here, three objects help us find out more about Victorian attitudes to death.

Few things carried as much social stigma in Victorian Britain as the ‘Pauper’s Funeral’. To avoid this fate, people needed to plan their ‘send off’ whilst they were still very much alive, as demonstrated by the fascinating story of the Farndale Hearse.

Today, Farndale remains an isolated moorland community, with hamlets and farms scattered across the valley, geographically much the same as during Victorian times. In 1839, this community came together to organise the purchase of a hearse, as well as funding a construction to house it. From meeting records, it’s clear that to achieve this they devised a method of subscription whereby each household paid according to its means. For this initial outlay, a family would be entitled to use the hearse, with just a small cleaning charge per use.

Elsewhere during the period, we see this ‘cooperative’ approach to funeral and mourning customs in burial clubs, for example, which allowed members to make small, regular contributions against costs. In the case of the Farndale Hearse, the inhabitants were divided into nine classes based on the poor rate.

The first class, earning over £60 per annum, were asked to pay 12s subscription. The second income bracket was for those earning between £50 and £60 per annum, with an 11s subscription. Unsurprisingly given the rural location of Farndale, the first six classes appear to be described as farmers, with the seventh noted as ‘cowkeepering’, with a subscription of 2s 6d. The final two groups were cottage-dwellers, asked to pay 1s 6d and 1s 0d subscription. A more substantial donation of £5 was also received from local landowner Lord Feversham. 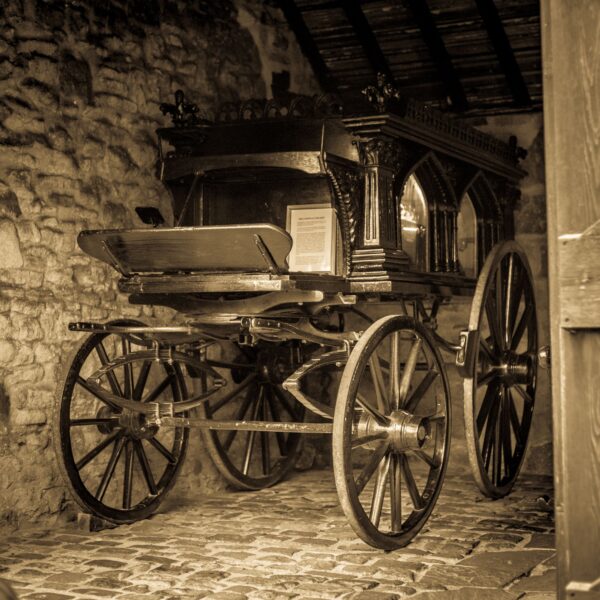 For the social elite, the final journey of the deceased to their funeral could be particularly elaborate and spectacular, but it was important to everyone, regardless of wealth. In Farndale, the journey posed practical difficulties due to the scattered distribution of inhabitants. The community purchase is therefore a sensible solution, but certainly an unusual one. Elsewhere in the region, for example in Goathland, we know that waggons were used for this purpose, sometimes painted black.

Like other aspects of life, funeral customs tended to filter downwards as the rest of society aspired towards standards set by the gentry, or perhaps even by royalty. But what is fascinating about the Farndale Hearse is that it offered the same final journey for everyone – democratising the process, allowing access for all (or almost all) to the communal hearse, a wonderful piece of craftsmanship, with highly-elaborate carvings, etched glass and silver-plated holders for bearing flowers. It must also have been a huge relief for families, expected to make every effort to support the dead to depart peacefully. Importantly, the expense of the hearse would not fall to the relatives in Farndale, but be prepaid, easing one of the burdens and expenses for the family.

The desire to ‘do the right thing’ by the deceased is also manifested in the funeral tea. This was a time for bonding and for celebrating the life of the departed by providing a respectable send off. Symbolic foods featured heavily, reminiscent of Medieval customs whereby families would pray and eat special cakes for the departed in order to speed the passage through Purgatory. All Hallows’ Day, the feast for the dead, had been celebrated with the eating of ‘soul cakes’ for that purpose.

Though Victorian views had developed from those of their Medieval ancestors, there was certainly a renewed interest in the relationship between this life and the next, in evidence in the Victorian fascination with Spiritualism; within this, cakes and eating also played an important role in mourning customs.

At most funerals, women served wine and sugar biscuits and a recipe for a ‘Funeral Spice Loaf’ survives from the moorland village of Cropton. This fruit cake also included treacle and buttermilk in its ingredients and is believed to have been handed out at the funerals of the poor. Many bakers also had a regular trade in funeral biscuits. In parts of Yorkshire, these had another purpose. Within the Harrison collection at Ryedale Folk Museum, we have a beautiful wooden biscuit mould that was used to create biscuits used to summon or ‘bid’ mourners to the funeral. Wrapped in paper and often sealed with black wax or tied in black ribbon, these were given out by a visiting ‘bidder’ attired in mourning clothes and generally often accompanied by a printed invitation.

All this, of course, was aided by the mass-production techniques of the period. Printing formalised the process of inviting guests to a funeral so that turning up uninvited became very bad form. It also allowed for continued displays of loss through the printing of mementos – the beautiful and intricately-designed Memorial Cards that were popular during the second half of the century.

Made of stiff card in black and white or cream, these were embossed with designs rich in symbolism, with classical or gothic motifs, becoming almost sculptural in quality as techniques increased in sophistication.

Embossing was a highly-skilled craft, involving hand-cutting a metal die. However, once created, the die could be used multiple times by carefully pressing on dampened paper which was then mounted and sometimes framed, with the name of the deceased added. Some also included a photograph. They were given by the family as a keepsake for friends and relatives and were clearly important ways for a family to remember a loved one.

The earliest examples in our collection date from the 1850s, although they increased in popularity during the 1860s and 70s, perhaps following the Queen’s example after the death of Albert, Prince Consort, in 1861. 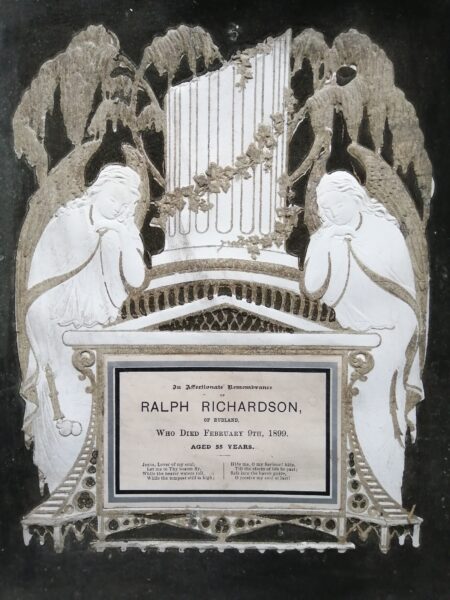