Ryedale at War: Unveiling the Monument

On Saturday 3 July 1920, gathered around the new War Memorial on the village green, the people of Hutton-le-Hole remembered and paid tribute to those who lost their lives during the First World War. The simple stone cross mounted on a plinth bears the names of the two men from the village: Private Albert Prattley Emmitt and Private William Ipson.

Albert Prattley lived with his father and stepmother here, working as a farm horseman in Muscoates. After enlisting in Malton, Albert served with the British Expeditionary Force which was caught up during the German ‘Spring Offensive’, a series of attacks along the Western Front.

Albert’s battalion took heavy losses and he was killed in action near Saint Quentin on 26th March, 1918, one of around 180,000 British troops to lose their lives in the onslaught on the region. 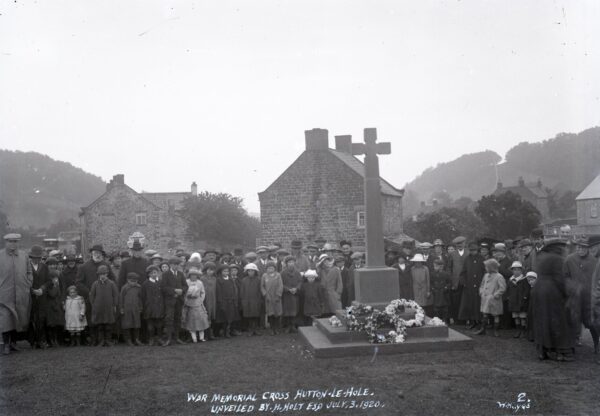 The other victim from the village, William Ipson, is believed to have died during the Battle of the Selle in October 1918, near the town of Le Cateau, also on the Western Front. Though William lost his life, the battle was to be a highly significant British victory.

William’s involvement in the village is less clear than Albert’s. Sadly, both men had lost their mothers during childhood. William’s parents were married in Rillington and he spent at least some of his early years in Skipton-on-Swale, near Thirsk, but it is probable that he is commemorated on the Hutton-le-Hole monument through his sister, Amy; on the 1911 census, she is recorded as a relative of the publican.

It is likely that Amy was part of the crowd that assembled in July, 1920. The moment was captured by William Hayes, whose Daylight Photography Studio – the oldest surviving example in the country – was based in the village and can still be visited at the Museum.

Amy married a Walter Trenholme and raised three children in the village. Albert’s father, Francis, and Albert’s brother, Thomas, known as Will, may be among the faces too. Will also served in France and Italy, sadly sustaining a leg injury that resulted in amputation, but his name is among 26 listed on the memorial to remember the survivors.

The photo provides a fascinating insight into village life a hundred years ago. It was Harrison Holt, the great-grandfather of a serving trustee at the Museum, Philip Holt, who officially unveiled the monument and can be seen in the photograph. We would love to hear from anyone who can help identify the other villagers too. 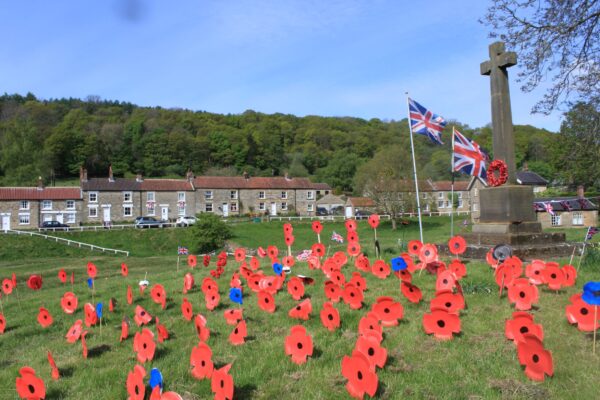 The Memorial on May 8, 2020, decorated to mark the 75th Anniversary of Victory in Europe Day

Sadly, within only a few decades, a third name would be added – with a connection with Ryedale Folk Museum. Gunner Christopher Frank died during World War Two. His younger brother, Bertram Frank (Bert) would later found Ryedale Folk Museum, becoming its first Curator when it became a charitable trust in 1966.

Christopher, known as Kit to his family and friends, grew up in Hutton-le-Hole and attended the village school where he was a keen cricketer. He enlisted in September 1939 and was posted to France, taking part in the Battle of France with the Fifth Regiment Royal Horse Artillery.

Back in England, he married Winifred Enid Last in Essex in 1940 whilst training at Great Dunmore in the county. From there, he was moved to CC Battery RHA and in May 1942, the Battery packed up their ‘tropical kits’ for their next posting. Christopher was involved in active fighting in the El Hamman area of Egypt, before moving to Libya. The War Diary on June 14th records that, tragically, Christopher was drowned whilst bathing in the sea to the north of the battery.

More information about the monument can be found in Hutton-le-Hole church in a book compiled by Heather Pettiford to whom the staff at the Museum are indebted for her research and that of Carol Fitzgibbon from the Hovingham Family History Group.